Collecting cartoonist Jeff Martin's humorous War of 1812 comic strips, featuring the misadventures of John and George, two not so fearless men of the Canadian militia. Heeding the call to defend Canada against the invading American army, John and George are now doing their best to be heroes, whilst also working hard to avoid battles, marching, danger or anything else that involves effort. 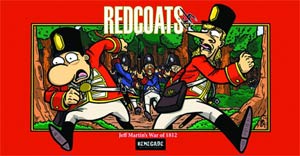